Prayer of the Signs, Salat al-Ayat, held at the Islamic Centre of England 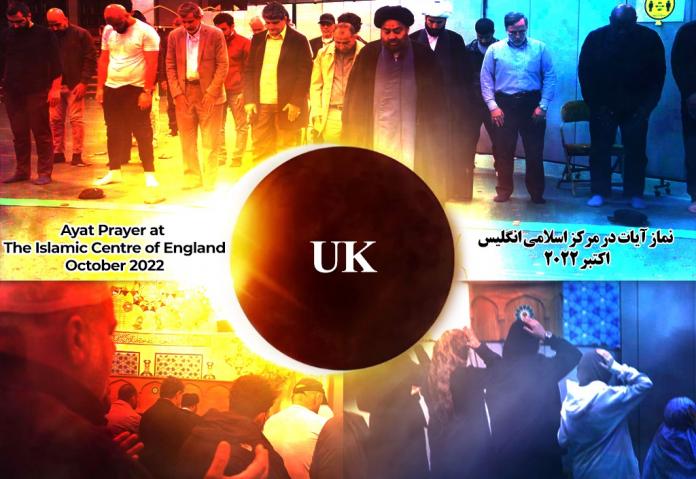 Salat al-Ayat, due to a partial solar eclipse in the UK, took place at the Islamic Centre of England at 11am on Tuesday the 25th of October 2022. The solar eclipse which took place between 10:08 am and

Salat al-Ayat can be performed in various ways, two being the most popular. The first method is for the worshipper to make an intention of the prayer, recite takbir, read Surah al-Hamd (chapter 1 of the Holy Quran) and any another surah (chapter of the Holy Qur’an), bow down and then stand up. Then the worshipper recites Surah al-Hamd again and any other surah and bows down again. This process is repeated the same way five times. After standing up from the fifth bowing, the worshipper goes down into prostration and then stands again performing the second unit in the same way as the first and ends the prayer as normal.

There is a second method for the prayer which is brief and takes less time. In the first unit, Surah al-Hamd is recited first, and then any other surah is divided into five parts. Some of our Maraji’ say that ‘bismillahir-rahmanir-raheem’ cannot be counted as one verse here, therefore, Salat al-Ayat is performed in a way, as in this case, where Surah al-Tawheed (chapter 112 of the Holy Qur’an), is divided into five parts. It is performed as follows:

First Surah al-Hamd is recited, and then ‘bismillahir-rahmanir-raheem’ and ‘qul-huwa-Allahu-ahad’ and then bow down into ruku. Stand up again and say ‘lam-yalid’ then bow down again. Stand up and say ‘wa-lam- yoolad’. Bow down again and stand up and say ‘wa-lam-yakullahu- kufuwan-ahad’. Go into ruku for the fifth time and after that, go into prostration, sujud. Then, stand up again and perform the second unit in the same way as the first unit and complete the prayer as normal.