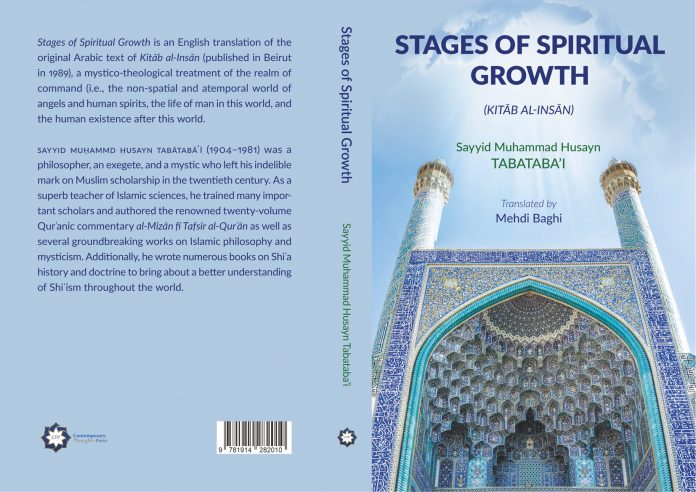 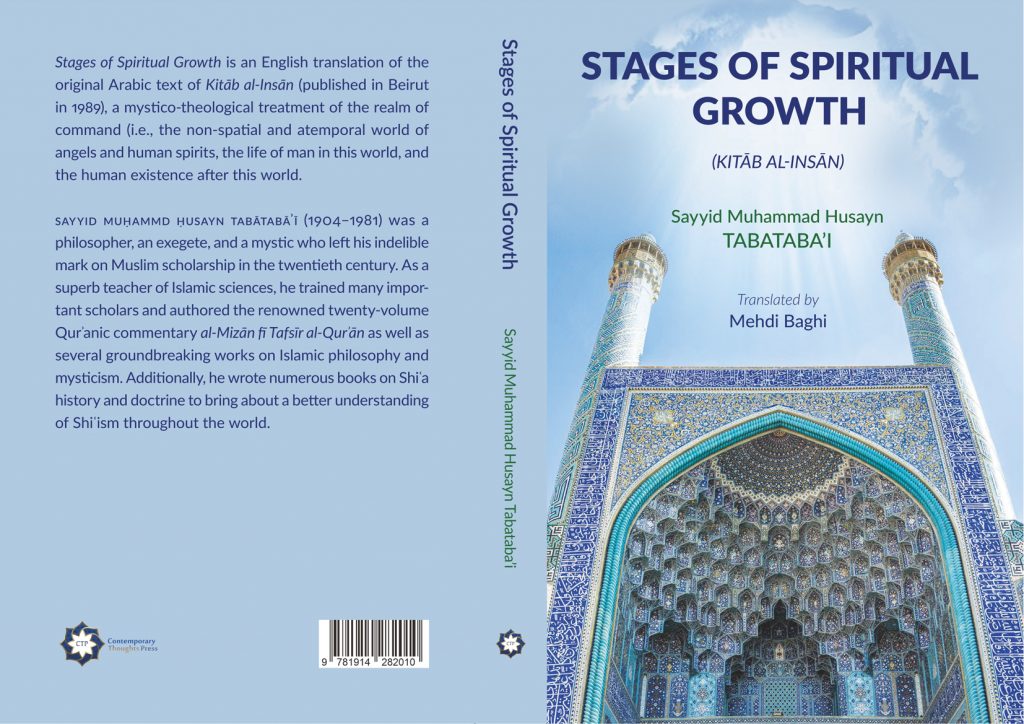 The Contemporary Thoughts Press of the Deputy of Academic Affair intends to publish a book entitled: STAGES OF SPIRITUAL GROWTH (Kitab al-Insan)

Seyed Hashem Moosavi has written in the preface of this book:

Sayyid Muḥammad Ḥusayn Ṭabaṭabaʾi (d. 1981) is one of the most distinguished Muslim scholars of recent times. Known by the epithet ‘ʿAllama’ – which is a title used to denote a person who

has a profound understanding of many fields of knowledge – he is remembered especially for his voluminous commentary on the Holy Qurʾan, al-Mizan fi Tafsir al-Qurʾan. This present book is a

translation of the Kitab al-Insan of the ʿAllama, a mystical and theological work in which a concise exposition of the stages of human creation is presented in three parts. In Part 1, Man before the World, three realms of existence are discussed: matter, imaginal form (mithal), and intellect.

The existence of the realm of command (ʿalam al-amr) and the non-spatial and atemporal world of angels and human spirits are also discussed. In Part 2, Man in the World, real entities and mentally posited entities are distinguished and a brief discussion on universal guidance is also elucidated.

In Part 3, Man after the World, which comprises the bulk of the book, ʿAllama Ṭabaṭabaʾi discusses in detail the human existence after this world and what is in store for a person after death. The Day of Resurrection, the Day of Recompense (yawm al-jazaʾ), intercession (shafaʿa), purgatory (aʿraf), paradise, and hell all receive attention. The last chapter of Part 3 is devoted to remarks on the universality of resurrection. The topics treated in this third part relate to the philosophy of the creation of man, the modality of creation, the different modes of life in this world and the next

world, the stages of human creation, the grave, purgatory, and a person’s ‘book of deeds’.

Throughout his work our erudite author makes references to the Qurʾan and other reliable sources of Islamic beliefs. I would like to express my appreciation of Dr Mehdi Baghi who translated from the Arabic original and who annotated his translation. Also, my thanks goes to Dr Amir Dastmalchian for

his helpful comments and for his assistance with preparing the translated manuscript for publication.

Director of the Contemporary Thoughts Press

Translation and annotation of this book has done by Mehdi Baghi and he has written in the note of this book:

Stages of Spiritual Growth is an English translation of the original Arabic text of Kitab al-Insan (published in Beirut in 1989), a mystico-theological treatment of the realm of command (i.e., the

non-spatial and atemporal world of angels and human spirits, the life of man in this world, and the human existence after this world. The author, Sayyid Muḥammd Ḥusayn Tabatabaʾi (1903–1981) was

a most distinguished and prolific scholar who is mainly known for his voluminous commentary on the Holy Qurʾan, the complete and readable English translation of which is yet to be completed.

Although the author has provided details for some of the references he cites in many places I have provided extra detail. I have also added a number of annotations in order to clarify some

of the ambiguities in the text. The present translator assumes full responsibility for all the errors and mistakes in rendering the original Arabic text into English and adding to the footnotes.

This English translation is but an initial step towards introducing a treasure trove of Islamic theology and mysticism to English readers.

The translator appreciates the efforts of Dr Amir Dastmalchian who has made an admirable layout of the book and provided invaluable comments. A note of appreciation is also owed to Dr Mortaza Rezaeezadeh who kindly considered it for publication and most diligently supervised the process.

To buy this book, you can refer to the following link: